The Mercedes G4 was a luxury German off-road car produced between 1934 and 1939. The G4 was equipped with an 8-cylinder in-line engine. The synchronized transmission provided front-wheel drive, four-rear or all six together. The car reached a speed of 67 km/h. The design based on the long frame provided a spacious interior for seven people. The vehicles were initially designated for the SS and used by Adolf Hitler and his aides. The chief of the Third Reich was driving this type of car during his stay in Poland in September 1939. A hallmark of the Mercedes G4 is the characteristic painting of the body work in ash color and black fenders. During the war the cars were repainted in a matte gray color.

From the set of 272 COBI building blocks you can build a 1939 Mercedes G4 off-road car. The model includes elements covered with high-quality prints that do not wear off even during intense play. The design uniquely reflects the original shapes of its historical inspiration in a sensational model scale of 1:35. The model contains surprises with new types of bricks, which are great for building cars and make it easier to further rework and design your own vehicles. The set includes a figure of the driver equipped with a suitcase and a cap with a historical print. The whole set is completed by a brick emblazoned with the name of the car. 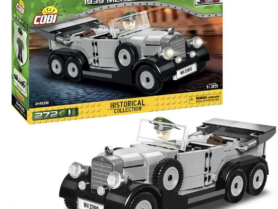