The three figures in the set depict soldiers of German units who took part in the Battle of Narvik in 1940. The Kriegsmarine sailor with a print on his back is equipped with binoculars and a Mauser Kar98k rifle. In addition to the backpack, the paratrooper received an MP 40 submachine gun and an M24 shank grenade. The last of the soldiers is a mountain infantryman (Gebirgsjäger) with the emblem on his cap. A sniper rifle is attached to the rubber gear belt. In addition the set includes a practical stand for figures and elements of the environment in the form of sea mines used for destroying ships, as well as sandbags.

With a variety of figure sets you’ll quickly build your brick army! Figures can be used in the construction of scenes and dioramas. Figure sets are also perfect for the COBI Historical Battle Game. 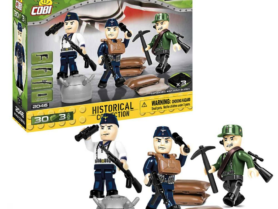