During its maiden voyage, on the night of the 14th to 15th of April, 1912, on the Southampton-Cherbourg-Queenstown-New York route, the British Trans-American R.M.S Titanic ocean liner collided with an iceberg and sank. To this day the accident is one of the most famous maritime disasters of all time and still evokes strong emotions even now. The Titanic carried about 2,228 people during the ill-fated voyage. It was 268.99 meters long and 29.41 meters wide. It was a marvel of early 20th century technology.

The ship’s brick model consists of 960 COBI building blocks. When built, it is 64cm long and 19.5cm high. Numerous details create the scale of 1:450 and faithfully reproduce the shape and body of the legendary original. The set contains several moving elements. You can move the cranes, screws and the rudders. The COBI EXECUTIVE EDITION includes a black brick base for the ship’s display stand and a white plaque printed with the ship’s name and scale. The manual uses a system of simple icons and pictograms, which will easily guide you through the construction process. The Titanic brick model does not require gluing or painting. All graphics and inscriptions are printed in the form of very durable prints that do not smear, scratch or fade under the influence of sun, water or even very intense fun. No stickers were used in the model. The kit is suggested to persons over 8 years of age. It will certainly bring a lot of satisfaction to both the youngest fans of bricks as well as adult enthusiasts of history and nautical engineering. The R.M.S Titanic model is sure to look spectacular both on the collector’s desk and in every teenager’s room. 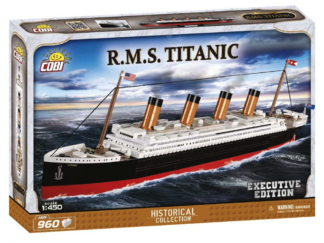